Also, there is a new review at BGG.
Posted by Philip at 12:32 PM No comments:

Just a reminder--I will be hanging out at the Steve Jackson Games booth most of Friday, August 14. You might want to pick up your copy of Revolution! earlier in the convention (before they sell out), but stop back by if you want yours signed or if you just want to play against the designer. Bring it!
Posted by Philip at 10:44 AM No comments:

Here are some nice reviews and comments on the Steve Jackson Games forum.
Posted by Philip at 8:07 PM No comments: 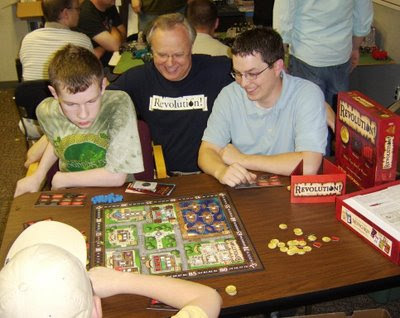 My parents caught up with Randy's SJG North-South Tour as he visited The Game Keep in Nashville. That's my Dad with the nifty old-school Revolution T-shirt (limited edition--kudos to Stephen). He's helping one of his co-workers and associated children with the game. There was some accidental taking of extra gold involved, but we won't go into that . . .

This was the first time my parents got to see the finished game, and I think they were impressed. So, Revolution has now made it from Minnesota to Louisiana. A few BGG threads also indicate that it has reached New York and San Francisco as well. Looks like the crack team of marketing gurus at SJG know their stuff. Or at least they know their crack . . .

One final note: It looks like I will be attending GenCon on August 14 (a Friday). Revolution should be available for purchase during the con. Come by the SJG booth to get a cool limited edition signature on your box or just come to challenge the master himself! See you there!
Posted by Philip at 10:50 PM 2 comments: