Starting January 26, 2011, Tiger Stripes is available for pre-ordering. The regular price for the game will be $14.99 plus $5.00 shipping to the lower 48 states (USA only). If you are close enough to pick it up and pay cash, the price is $13.99. Shipping to other countries will be considered individually.

However, during the pre-order period of January 26 to February 11, 2011, you may sign up for a $1.00 discount. Simply email your name to pdubarry@fuse.net with "Tiger Stripes Preorder" in the subject line and indicate whether you need shipping or will pick it up. The people on this list will receive a PayPal invoice around February 14 and will have until February 28, 2011, to submit payment. After that the discount will be over.Keep in mind that this is a limited run of 50 copies, so get yours while you can!
Posted by Philip at 8:14 PM No comments:

Email ThisBlogThis!Share to TwitterShare to FacebookShare to Pinterest
Labels: news

Also, Isabel and I attended a Game and Toy Industry Professionals meeting organized by Michelle Spelman. Thanks for putting that together, and thanks to all who let Isabel show off her new game!
Posted by Philip at 12:04 PM No comments: 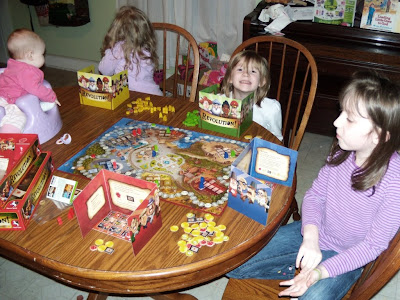 Steve Jackson Games sent me a copy of the German version of Revolution! (by Pegasus Spiele) today. So the girls and I took it for a test run tonight. As you can see, not all of us are quite paying attention! I am very pleased with the quality of the components and the artwork is growing on me. Not being able to read (much) German was not a hindrance to playing because of the well-thought-out symbols. Nicely done!
Posted by Philip at 7:35 PM No comments:

Email ThisBlogThis!Share to TwitterShare to FacebookShare to Pinterest
Labels: just for fun, version

The Boxes Have Arrived! 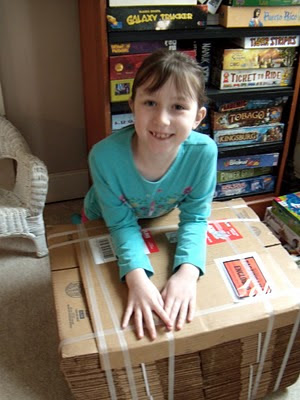 Here is a picture of Isabel with her new shipping boxes (all carefully recorded on her Excel spreadsheet). All she needs now are the finished Tiger Stripes games and about 50 people to mail them to!
Posted by Philip at 4:44 PM No comments: 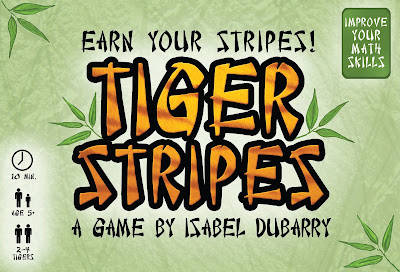 We just sent Isabel's first game in to Blue Panther for printing. I figure we can surely get rid of 50 copies, right? She's invested her own money in the project and will reap the rewards (if any--I constantly warned her!). Either way, it's a great life lesson. Anyway, it's a quick children's game that involves some easy math. We'll be saying a lot more about this game in the weeks to come! Our first game under the duBarry Games label! Woo-hoo!
Posted by Philip at 11:37 PM No comments:

Goals for the New Year

First off, what did I (and/or my kids) get for Christmas? Forbidden Island

turned out to be pretty cool. We gave this to a cousin but my parents also gave it to me! Race For The Galaxy: The Brink Of War

has yet to hit the table because I don't have the other expansions yet--turns out you need them all to make it work. This will be remedied during my upcoming birthday (3 weeks away). The girls got Carcassonne - Princess and Dragon Expansion

which was fun but made them angry. Maybe that will pass. They also got a few Lego games. So what about 2011?

Kingdom of Solomon should be finished soon even though James Mathe of Minion Games has just launched a new board game rating and review site called Board Game Info. Pretty exciting stuff!

I am currently in the process of lining up files to send to the printer for two small self-published titles: Tiger Stripes (by my daughter) and Square Off. There's still quite a bit of work to do to make that happen.

Jolly Rogers is having trouble keeping down costs on the game I gave them, so I may have to do some re-engineering to make that one work out.

Two other big games have nearly reached the completed prototype stage. These will both be ready for Origins, along with the game that didn't find a home last year. I will almost certainly get at least one or two more ready during the course of the year.