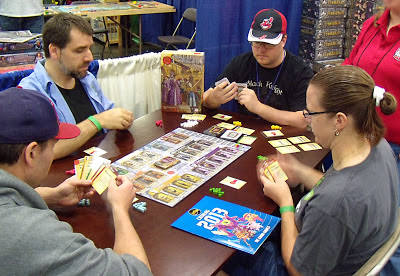 Another Origins has come and gone. I was only able to attend Saturday, but all the vendors said that traffic was up significantly from last year. Apparently, the dates matter. This year I got to take my daughter, Isabel (of Tiger Stripes fame). She got to meet lots of great folks.

One of the highlights was a demo game of King of Tokyo. Isabel managed to get about 12 points, then she acquired the card where you get 9 points for rolling one of each thing. Then she got the card that lets you change one die. And then she rolled one away from a straight for the win! A space penguin is on its way to her in the mail, compliments of Iello. We later bought the game and also got a nifty promo pack of extra cards. Sweet!

I got to talk shop with several publishers. I also got some design work done with Jason Kotarski (The Great Heartland Hauling Co.) on a new mini-game. More on this in future posts . . .

I got a copy of the mini-expansion for Kingdom of Solomon called Chronicles of the King, co-designed with Daniel McDairmant. It looks nice! Minion Games had several demos of KoS going during the show. AEG has many demos of Courtier going as well.

In other news, have I mentioned that I have a new Tempest game coming in time for Essen this year? Because that's happening. :)

A nice time was had by all. Isabel was amazed by how fast it flew by. Now to get to work designing more games!
Posted by Philip at 3:47 PM No comments: