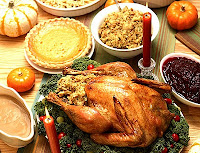 Since I will be traveling all week, I thought I would wish everyone and early Happy Thanksgiving! Also, look for an announcement from Minion Games this week. Some teaser art from my new game should be coming your way very soon!

In other news, my Hippodice entry did not make the cut. They got 190 submissions and took 50 (I think). They said, "This years´ limit was at a mark of  2,67 on an 6-mark-scale." Not sure what that means, but maybe I've give it another shot next year! In the meantime, I happen to have a really cool game just itching to be published . . .

Anyway, hope you and your family have a great Thanksgiving. Ever if you're not American. I'm sure God occasionally blesses people from other countries, too, so be thankful! And eat some turkey!
Posted by Philip at 9:16 PM No comments:

Well, maybe that's not exactly the case. Apparently, BGN contributor Kris Hall had a really, really, bad experience with Revolution! recently. He managed to score only 30 points in his first game. Having played my game hundreds of times, I can attest to the fact that this can certainly happen once in a while--people can just get brutally trounced. Does this happen because the game is completely random?

A commenter had a similar experience, noting: "To me it seems that the best strategy to have in this game is no strategy at al, just place your tokens randomly." He is both right and wrong. There is no "best strategy" in Revolution! except to stay under the radar and avoid too much direct confrontation with the other players. If you develop too strong of a pattern (particularly from game to game), the other players will (or should) punish you for it. The corresponding maxim to this is that any strategy will win if left alone for long enough.

One thing that might help reluctant players was suggested by another BGN commenter. Use the Bid Refund Variant. Under this system, players get their tokens back if they lose or tie a space. This assures that you pay exactly what a space is worth and not more or less, though there is the penalty of lost time. And it helps reduce feeling "like one of those mice who are subjected to random electric shocks in cruel psychological experiments." I suspect the SJG people like the other way because they're sort of into cruel electric shocks, but that's a topic for another day.

So is the game completely random? That depends on who you play with. I think you'll find that, over time, Revolution! is much less random that you first thought.
Posted by Philip at 11:04 AM 1 comment:

Revolution: The Palace Ships Next Week! 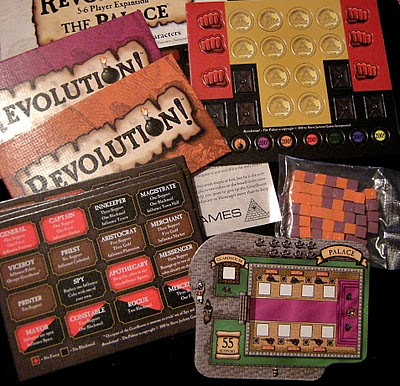 According to Twitter, Revolution: The Palace will ship next week. Just to recap, this addition to the base game allows you to play with 5-6 players (or play with 4 using the new stuff). It adds 4 new spaces on the expanded bid card and an awesome new building! The gameplay experience goes from sweet to super-sweet! Don't miss this one. Makes a perfect gift for anyone who has the original game, or give both for a truly amazing Christmas!

I got my royalty statement for Revolution! and it looks like sales are doing quite well. The last two quarters, in particular, have been very nice.

Also, I received word that Wattsalpoag really likes the prototype I gave them. I may have to wait until 2012, but they seem to be very interested in adding it to their lineup!

I'll leave you with this, my original Palace tile for use with the homemade version of the game: