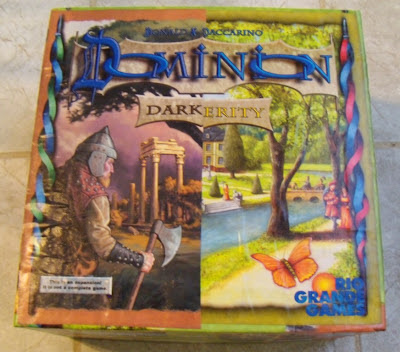 As I mentioned in my last post (Making a Box for Dominion), my wife suggested that I use her Mod Podge and the labels from my leftover Dominion boxes to decorate the large box I constructed. Tonight, I did just that.
Read more »
Posted by Philip at 8:41 PM No comments:

Making a Box for Dominion 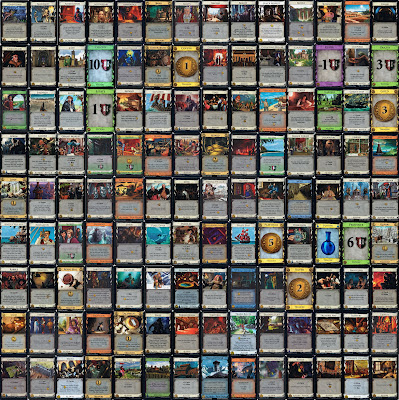 Dominion is pretty much my favorite game. With the release of Prosperity I began to store all the cards in one box. Then came Hinterlands and, most recently the seventh expansion, Dark Ages. With the series winding down (only one expansion to go?), this was the time to build a new, more durable box. The following is a tutorial for building your own version. 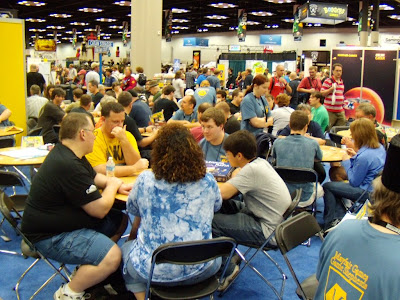 GenCon 2012 went very quickly for me this year. I was only able to make it for Thursday. Even so, I had a nice time and got several items checked off my to-do list. As you can see in the picture above, the place was PACKED. I'm guessing even more people came for Friday and Saturday. Everyone I talked to said sales were doing very well.

I spent the morning chatting with the AEG folks and pitching a new game to them. I would say it went pretty well, but we'll have to see how it turns out later. I understand that a few copies of Courtier got played at the big shindig Friday night.

Next, I tried to buy 7 Wonders: Cities, but the 200 (!) copies had gone in a matter of minutes after the doors opened. I did buy a copy of Dominion: Dark Ages, which was in adequate supply. So far, I've managed to play four games of this--I like the new cards! Lots of room to explore.

FFG had Star Wars out the wazoo this year. I snapped a pic of their surface of the Death Star setup for X-Wing/Tie Fighter game. Looks pretty snazzy. And, of course, lots of Star Wars costumes: 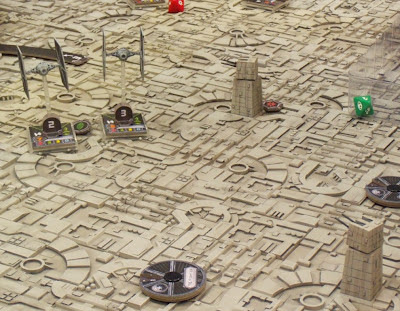 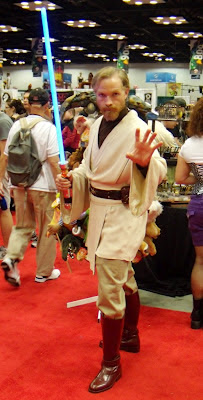 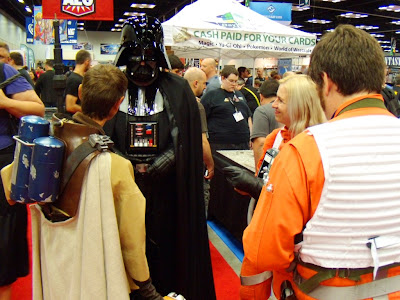 Some balloon artists decided to make a dragon during the con this year. Wow. 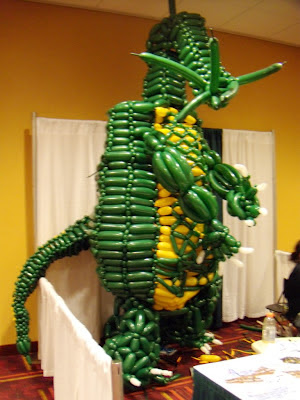 I'm not sure what game this is, but what a setup! 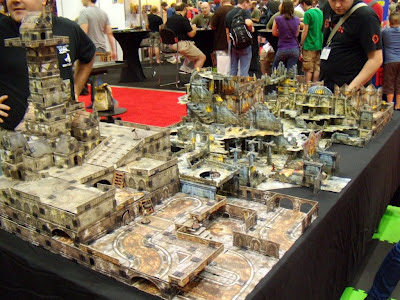 Kingdom of Solomon had a pretty low profile at the show. James didn't get a booth, but he did demos in the gaming hall. Hope we sold a few of these . . . 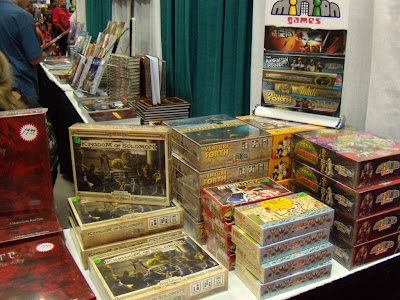 Later in the day, I shuffled around behind Dan from Game Salute as we searched for card sleeves to complete a playable prototype of the upcoming Skyway Robbery (more about this in the weeks to come). We cut the cards and chatted about future plans. I got to demo this once for some friends--it's really starting to come together.

I got to see the Steve Jackson Games people for a few minutes. Andrew Hackard has become quite the celebrity these days, doing a big signing at the booth. Once Ogre clears the docket, perhaps there will be a bit of focus to spare on Revolution!-related products. I've been mentioning this possibility to lots of people in the hopes of creating a groundswell of demand. We'll see . . .

I took a nice break in the afternoon for an early dinner with the couple who backed KoS on Kickstarter at the top level last year. It was great hanging out with them again!

After a few more demos, handshaking and chatting, I headed back to Cincinnati, arriving home about midnight. All in all, it was a worthwhile trip.

Posted by Philip at 6:43 PM No comments:

GenCon 2012 will be here in less than a week! Unfortunately, I will only be able to attend the show on Thursday--busy times at the house of duBarry. Even so, I am looking forward to cramming in as much as possible into that short time. Here are my plans:

2. Check in with AEG and help out with demoing. They were kind enough to spring for my badge this year, so I hope I can be of enough service to justify the expense. I will be bringing my copy of Courtier, so maybe I can provide some sneak peeks. Also, I have a new game to pitch them . . .

3. Spend some time at the Game Salute booth. My latest game, called Skyway Robbery, should have a nice new prototype for us to begin playtesting seriously. Maybe you can try it out!

4. Catch up with Steve Jackson Games and Minion Games. I'm still pushing SJG to get working on the next bit of Revolution! content. Feel free to ask them about it demand this new content.

5. See some old friends, shoot the breeze and enjoy the day.

6. Finish up by finding the Unpub area and get in a game of Courtier, Skyway Robbery and/or Family Vacation. This area may not be fully operational until Friday, but I'm guessing someone will be around. If there is no blue noodle, I'll just try to hang out with the rest of the Game Salute people.

So that's just about everything. That sounds like a lot to do in one day. I'll let you know how successful I was after the show. Two more bits of news:

The Cardboard Jungle podcast released an episode today featuring AEG games and designers . . . and me! I haven't quite figured out how to actually download it, but you can listen to it online.

Also, MeepleTown posted an interview with me today. He asks some great questions, so you might learn something new!

See you after GenCon!
Posted by Philip at 12:07 PM No comments: