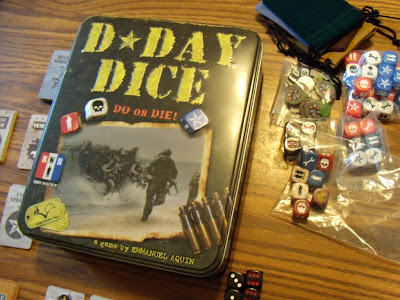 Sorry for the lapse in posting. Church camp for the teenagers was last week, and church camp for the middle-age kids is next week. Busy times! So wouldn't you know it--D-Day Dice arrives during the week in-between my camps. This was both devastating (time-management-wise) and really awesome! I had almost forgotten it was even coming, but then I found a giant package on my porch. Only as I opened it did the truth dawn on me--D-Day Dice had arrived! 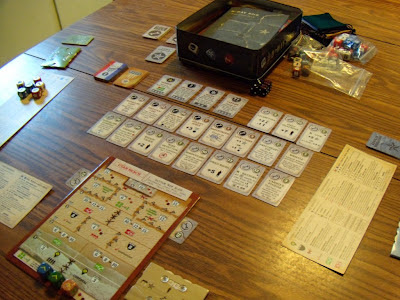 It took a while to unpack all the loads of stuff and packaging in the box. I didn't even take a picture of the nifty messenger bag. Everything is pure quality. The game and the expansion come in sturdy, cardboard boxes, but everything fits pretty well inside the collector's tin. So how is the game itself?

The gameplay is clever and engaging. You begin your turn by rolling six dice: two red, two white, two blue. The dice all have the same six symbols which determine what resources you get. You lock two or more dice and roll the rest. Then you lock more, if desired, and roll one more time, Yatzee-style. Because of the three colors, you can make several different combinations. Add in all the special cards and you can manipulate the dice even more.

The main resources are troops (needed to survive the beach), stars (to recruit specialists with abilities), courage (to move up the beach) and tool points (to buy various one-off bonuses). Everything can be neatly recorded on the handy dial-based device.

And then there's all the cool items and map symbols to jazz everything up. Then you can add in one of the many expansions and additional card sets. You can even play the Germans instead of going coop.

The whole experience has been fun, tense, challenging and rewarding. My daughters have also had a blast playing it. Well done, Valley Games!
Posted by Philip at 12:14 AM No comments: