Essen and Other News

Well, Essen is over and, once again, I was not there. This really is starting to become a "thing" with me. Anyway, at least Revolution! was there (both versions plus The Palace): 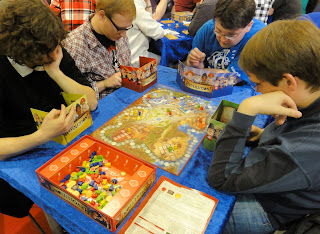 (from BGG)
SJG had a booth this year and demoed The Palace. It even made it onto the BGG Geekbuzz list! The current ETA is mid-November for the release. Apparently, I will get my copy of the German edition at the end of the year.

In other news, Revolution! made Melody Vasel's top 100 games list. We'll have to wait and see if Tom also likes it that much. Also, I have entered the prototype passed over by Z-Man into the Hippodice competition in Germany. I'll find out in a couple of weeks whether they will need a copy mailed to them. At the very least, I'll get some nice quality playtester feedback.

This week I've been working on a new economic game. I finally finished the initial prototype and even got in one 15 minute-first-turn-only playtest with encouraging results.

Finally, the artwork for Kingdom of Solomon (Minion Games) is filtering in. I got to see some color art for the first time just the other day. Once the cover gets finished I'm cleared to begin releasing more information and talking about how it all works. Still waiting on Jolly Roger Games and Wattsalpoag for word on my other games.
Posted by Philip at 2:59 PM 1 comment:

SJG just unveiled a cool new Flash Demo of Revolution! Now if they would start working on an iPhone version. :)
Posted by Philip at 10:08 AM No comments:

UPS delivered my pre-ordered copy of Dominion: Prosperity from Coolstuffinc today. I just finished cramming all the cards from all five sets into the new box (the old one is falling apart) separated by my custom dividers. They all fit! I managed to get in three games with my daughter. We went through every card during the course of the games. I've been really pumped about this expansion, and so far it's meeting/exceeding the hype. Several of the 25 all-new Kingdom cards are just beefier versions of old cards, but many are quite unique, usually affecting the buy phase.

Using an Expand to upgrade a Province into a Colony (10 VP, 11 Cost) is nice. The feeling of buying a Platinum (5 Coin, 9 Cost) instead of a Province in exhilarating! And using King's Court with Pirate Ship for three attacks is amazing! I can't wait to discover the crazy hidden interactions that always lurk just around the corner. I realized why Dominion is my favorite game: it's really about 1,000 games in one box. As far as I'm concerned, Donald X. can keep 'em coming! 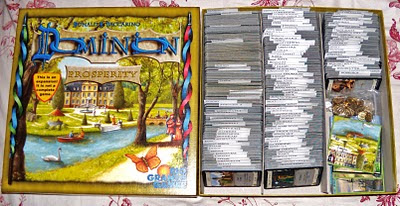 Email ThisBlogThis!Share to TwitterShare to FacebookShare to Pinterest
Labels: just for fun, review

SJG gave away a copy of The Palace on Twitter a few days ago, and the winner posted a glowing review on BGG! That's how bribes are supposed to work! Otherwise, we have to use force . . . :) In other Twitter news, I stumbled onto this German website that has snappy little blurbs for each character in Revolution! (in German, of course, so use a translator). It's still unclear when The Palace will be available; however, I am hoping they get them in time for Essen later this month. SJG plans to have an "official presence" in Hall 6. Sounds exciting!

In other news, Z-Man has passed on my Henry the Great prototype, but Jolly Rogers is nearly ready to hammer out a contract for the Vacation prototype. They want to do preorders on BGG, so stay tuned for more info. Who knows, maybe I'll finally enter Hippodice this year!
Posted by Philip at 10:26 AM No comments:

I just noticed that the BGG Design Forum has a sticky post on myth-busting the copyright issue. Basically, you have minimum protection whenever you create something regardless of whether you officially filed. Sure, people can "steal" your idea, but it won't do them much good if your game is better and first. Worth a look if you're interested in game design.
Posted by Philip at 10:59 PM No comments: