Picked up this link on Twitter today. Stewart Woods has put together an impressive and very readable thesis on the history of eurogames and looks into the effect of the play environment on the play experience. I'm only on page 92 (of over 300), and I've already learned far more about the industry than I've found in any other source. You may think you know about eurogames, but you could probably stand to learn a lot more!
Posted by Philip at 11:21 PM No comments:

Email ThisBlogThis!Share to TwitterShare to FacebookShare to Pinterest
Labels: design, just for fun

I just finished reading a great time-management book called 168 Hours by Laura Vanderkam. It turns out that we all have 168 hours every week (24x7). As a game designer, assistant pastor and homeschooling father of 3 (4 in mere days), my schedule can get a bit hectic and disorganized. Vanderkam urges her readers to reevaluate their priorities and restructure their lives to accomplish what they truly want rather than just taking the path of least resistance.

I followed along by keeping a spreadsheet time diary, logging each activity and how long I spent doing it. I feared discovering 168 hours packed with wasted time and useless web-surfing. I discovered that I sleep about 8 hours a night (the average/recommended amount) and that I work 30-40 hours a week. This week I also spent over 15 hours reading (more than I intended, but it could be worse). I spent about 10-12 hours interacting with my family and about 8 hours attending church and related events (some of this counted as work). I spent 10 hours watching TV with my wife (this number could be a bit lower). One obvious area in need of improvement: 0 hours spent exercising.

Overall, I discovered that things are going better than I thought. The book had many other great ideas for tweaking your schedule to get the most out of life. I definitely felt more intentional about my time when I had to keep a log. That step alone might help you get control of your life. So, are you really doing everything you want to be doing with your 168 hours?
Posted by Philip at 3:39 PM No comments:

Email ThisBlogThis!Share to TwitterShare to FacebookShare to Pinterest
Labels: review

Today I attended the first Cincinnati Comic Expo held at the Cintas Center. Next year the event will be moving to the Duke Energy Convention Center downtown. Terrible parking but much more space. Anyway, this year's expo seemed to be well-attended. I had a table in the board game room, courtesy of Yottaquest. Naturally, I was running demos of Revolution: The Palace. 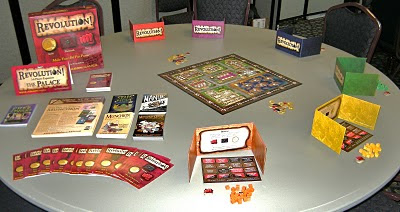 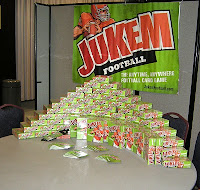 The Revolution table stayed hot all day with barely enough time in-between rounds to grab a pretzel and Reese's Cups (the lunch of champions). All told, I held five full demos including 4-6 new people each time. BTW, I played in four games winning one, losing two (but coming up a close second) and dramatically tying 181-181 in the other! Must I brag about winning my own game? Yep. Here are a few shots of the games: 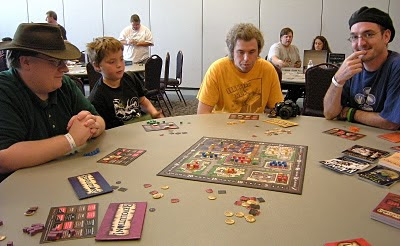 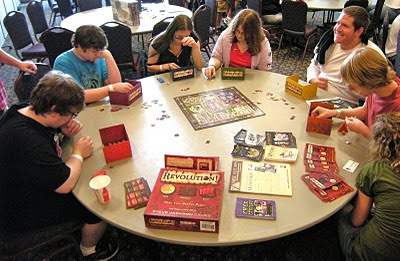 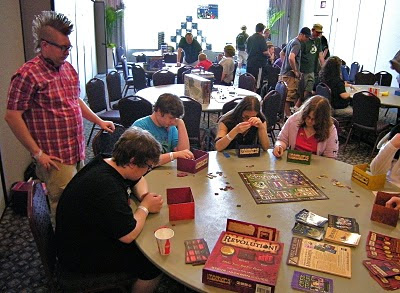 The guy with the rockin' hair (Mike) is a true fan. He interviewed me on his camcorder (I'll link to it when it gets posted), bought my game and had me sign it. In fact, so many people bought my game, it sold out--all four copies!

I'll close with a couple of Star Wars costumes. There were many, many costumes I failed to photograph or else did so poorly. And, for the record, The Predator guy got robbed at the contest. Just sayin'. 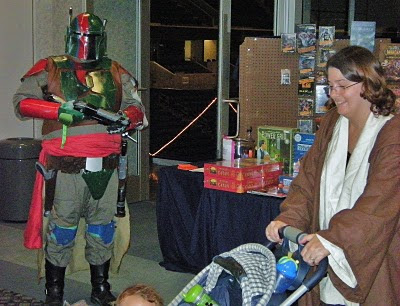 Email ThisBlogThis!Share to TwitterShare to FacebookShare to Pinterest
Labels: convention

...has arrived! I'm doing a promo event this weekend (Cincinnati Comic Expo), so I got the SJG guys to send me some material. They also sent a hot-out-of-the-box copy of the Revolution! expansion. It's designed as a hanging bag for stores rather than a box. They've gone this route before, so maybe that's okay. All the bits will fit nicely into the main box, so you don't really need a new box anyway. Here are some pics: 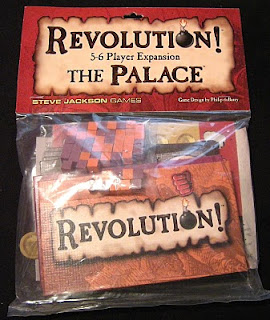 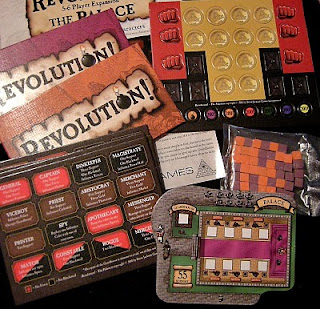 The package includes: a new building for the center of the board (called, *gasp*, The Palace), a rules page, 2 new bidding screens (in purple and orange), 6 new expanded bidding boards (featuring four new spaces), purple and orange cubes, scoring tokens, high-score scoring tokens (200/300) for all colors, and more currency tokens--just in case!

BTW, it's also extremely fun--SJG really made this one shine! Thanks to all those who helped playtest the expansion. Special apologies to Thirdfloor Gamers and Xenia Gamers--I tried to get you playtester credits, but it didn't happen. I'll try harder next time! The game should be available in just a few weeks.
Posted by Philip at 4:50 PM No comments: