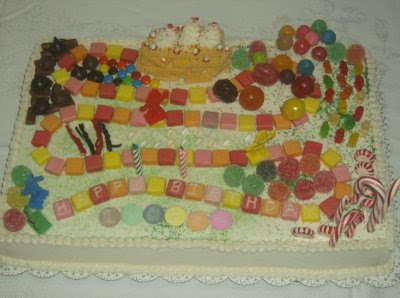 Yesterday we celebrated our youngest daughter's second birthday with the help of this amazing Candyland cake (compliments of a friend). I wouldn't have thought to mention this on my game blog, but a recent post on BGN convinced me. I've never heard of anyone applying quantum mechanics to a discussion of this simple child's game before, but there's a first for everything! Here's a snippet:

The astute reader will see where this is headed. Candyland is an entirely predetermined game from the onset. Assuming no extra shuffles are necessary, perhaps by using three decks in the initial shuffle, once you pull that first card there is nothing you can do to change things. Your fate is sealed – you just don’t know where it will lead. This set-up differs from a game in which one rolls dice or shuffles cards several times during play, effects which subject players to completely random effects as the game progresses.

A potential answer, perhaps, lies in quantum mechanics, specifically in the infamous Schroedinger’s cat analogy. For the uninitiated, here is the analogy: A cat exists with a cyanide capsule inside a sealed box. Every second the cat remains in there, there is a certain probability (p) the capsule will open, killing the cat instantly. When you open the box, will you find a dead cat or an alive cat? Was the cat dead or alive before you opened the box? The obvious answer upon opening the box is that there is a certain probability (P) that the cat has died in the given time, and a certain probability (1 – P) that the cat is still alive. Once you open the safe, you know for certain one way or another, an action called “collapsing the wavefunction” (for reasons I won’t get into here).

The interesting part comes from the state of the cat before opening the box. While no observers are around, the cat is said to be both dead and alive at the same time. This is, of course, a silly result, and it is often refuted with an easy claim that the quantum universe does not apply to a macroscopic one. (Half of all quantum effects cancel out once you are dealing with just two particles; a single mole is composed of 10^23 atoms, hence the cat is never both dead and alive.) But at the quantum level, this sort of thing does happen, this situation does exist.

The question here: Can we consider a theoretical random color spectrum with a given probability of turning up each turn as not macroscopic in nature and therefore applicable to quantum effects? Or is each card a macroscopic entity, with the information imprinted upon it being dependent upon the card itself, thereby leading to a nullification of any and all quantum effects? Is any possible quantum effect here largely canceled due to the number of cards necessary to play a complete game?

Wow, wasn't that fun? Now for some real fun. Here are my house rules for making Candyland a truly enjoyable family (not just little kid) experience:

Instead of using the deck of cards to move, deal out five card to each player and play from this hand of cards. If you play a red, move to the next red and so on. You may also choose to skip your turn and play a card on someone else, causing them to move backwards to the indicated color (or character). Now you have more decisions to make, instead of just the one (should I waste my time by playing this silly game or not?). Enjoy!

Email ThisBlogThis!Share to TwitterShare to FacebookShare to Pinterest
Labels: design, just for fun