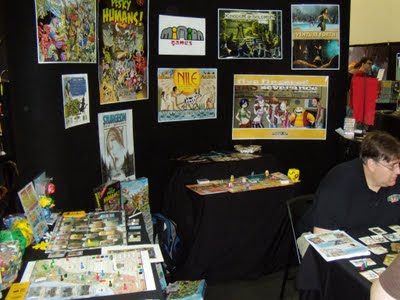 Origins Game Fair 2011 has come and gone! I had a great time again this year. I took my brother-in-law Aaron (his first con!). I think he had an okay time. This is a shot of the Minion Games booth where Kingdom of Solomon was on display. I got to explain the game to lots of convention-goers and hand out many of my Kickstarter flyers. More on that later . . . 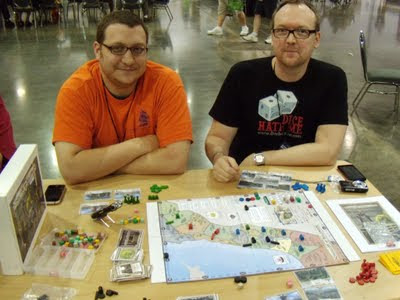 One of the highlights of the con was meeting Chris Kirkman of Dice Hate Me and his buddy Shawn. They played Kingdom of Solomon and seemed to enjoy it--despite my utter inability to resist crushing newbies. After that, we cracked open Revolution! with The Palace expansion. A few more people got to jump in this one, including John Moller of Cartrunk. David from Clever Mojo Games even played a round or two while Chris briefly stepped away. I had a blast hanging out with these guys!

Of course, one of the main reasons I attended was to pitch some new prototypes to publishers. This turned out very well. I got some significant interest in four of the five games I brought. More announcements to follow--I hope!

I also spent some time at the Jolly Roger Games booth. They had my Family Vacation game on display. We put some final touches on the contact for this. It's looking like we will be doing a Kickstarter campaign to get this one going in the near future.

While at Origins, I bought two games: Dominion: Cornucopia

. I've played just a little of both and am very happy with my purchases! All in all, it was a great con!

One final note: Kingdom of Solomon is still up on Kickstarter for 6 MORE DAYS. So far, we have over 100 backers and have raised over $7,300 (nearly 150% of the original goal)! Thanks to all my supporters. There's still a little more time for you to climb aboard. Pledging on our Kickstarter will ensure that your copy arrives much sooner than anyone else, and you'll also get the promo card and have access to some other cool rewards. Don't miss your chance!
Posted by Philip at 8:33 AM