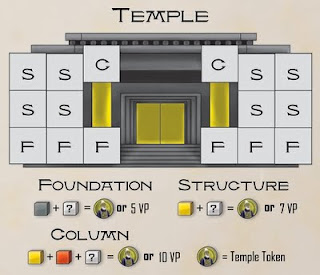 Just days (hours) before the final printing, we have decided to make one final adjustment to Kingdom of Solomon. The Temple will now have six extra spaces to fill. During our demos at GenCon, we ran into a few people who got carried away with building the Temple even against their own interests. Just because it was there. This led to a shorter-than-expected game and an unsatisfying experience for all.

A quick recap: The game ends on the round when either all eleven building sites are filled, or when one player places all five of his buildings, or when the Temple is completed. Having the most Temple Tokens (gained by helping the build sections of the Temple) also gives a player control of the High Priest and 20 VP at the end. So rushing to complete the Temple might seem attractive, but is usually not best way to score points.

I'm still convinced that players would never repeat this mistake in subsequent games, but in this world of thousands of new games, one play might be all my game gets at some tables. Therefore, we added more spaces. Now even all the players working together cannot complete the Temple in fewer than four turns and are far more likely to have a "full" game experience.  This change will not necessarily add any extra length to the game, as the other two end triggers remain unchanged. Playing time will still normally fall into the 60-90 minutes range.

One final note: If you will be attending Essen 2011 and would like to preorder KoS and pick it up at the show, use the code PICKUP11 at checkout and you will not be charged for shipping. The current preorder price is $44.99! Visit Minion Games for more details.