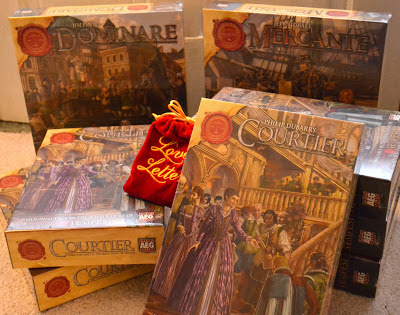 Yesterday, I finally received my Tempest games from AEG, including six copies of Courtier. In honor of this joyous occasion, I offer you this short pronunciation guide.

So how does one pronounce the name of my new game? I've heard several variations, some more humorous than others. By the way, this can also stand in as a sort of psychological evaluation. Enjoy.

1. COUR - tee - ay
This first pronunciation comes up rather frequently. I imagine the people favoring this version have had some experience with foreign languages (maybe an excessive amount of French in high school or early exposure to Latin, etc.). Something about this version gives the vague sense of someone trying too hard, in the tradition of the classic overachiever. It might also indicate a flare of snobbishness for good measure (sounds a lot like Cartier, right?).

2. COUR - tee - AY
Closely related to number one, this pronunciation is the verbal equivalent to extending one's pinky finger whilst drinking tea. It is also favored by people who are pretending to belong to the first group, but clearly do not.

3. cour - tee - AIR
I imagine one must bow and gesture graciously with the hands while using this pronunciation. This variation belongs to the elegant scoundrel type. If you hear someone inviting your wife or daughter to play a game of "cour - tee - AIR", get them away from this handsomely-roguish (but unscrupulous) person post haste.

4. cour - TEER
This pronunciation cannot help but induce stifled laughter in those who hear it. If "COUR - tee -ay" is all high-brow pretension, "cour - TEER" is undiluted comedy (intended or otherwise). Normally, one would be tempted to question such a person's level of intelligence. However, in the case of Ryan Metzler, I am quite assured of his deliberate use of this variation for the purpose of irony. Well played.

5. COUR - tee - ur
Finally, we examine the most humble, yet tasteful, version of the word. Those who employ this pronunciation exude common sense and tact. Their levelheadedness and tireless devotion to upright culture marks them as the guiding lights of civilized society. Also, they happen to be correct, according to Merriam-Webster.

So there you have it. How do you pronounce Courtier?
Posted by Philip at 12:18 PM