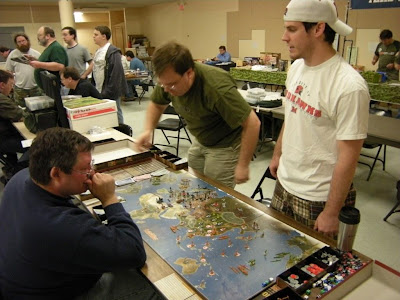 For those not in the know, Greg Smorey hosts an annual event for the Axis & Allies faithful. The Gathering is held in Cincinnati, but people come from all over to attend (one as far as Las Vegas). The new Anniversary Edition of A&A (known to cool people as AA50) got a lot of time at the table this year. Unfortunately, it looks like it might end up being too long of a game for regular tournament play (we'll see what the NEW new version looks like when it comes out this fall).

I had to come by myself this time, but my old buddy Tom J. volunteered to partner up. We faced off against veteran opponents Geoff and Steve. We gave them the Allies and five IPCs for the bid. Things went downhill for them from the start. The dice gods were not cooperative. Germany came at Russia with everything. The Allies chose to ignore Japan, to their ultimate peril. I was able to expand the co-prosperity sphere to a substantial size.

But things were not so easy. Five allied bombers reduced Germany to a crawl. Their invasion forces took up permanent residence in Paris. We lost the Luftwaffe in a successful, but ill-planned, naval operation. We were forced to retreat from Caucasus. Not good. Then . . . Germany and Italy held on. An Allied attack on Italy was just barely thwarted. Meanwhile, Japan started pushing massive numbers of tanks into Persia and India for the push north. After seven brutal hours, the Allies conceded their defeat.

Thanks for the game, guys! And props to Greg for another great SG event! Hope to see you all at Origins.
Posted by Philip at 12:20 AM