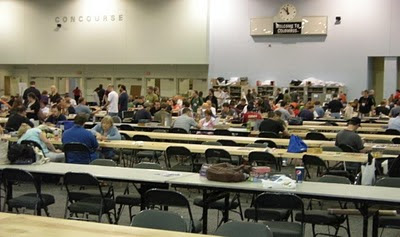 Origins went very well this year! I took my brother-in-law, Drew, with me to help work the show. Of my five prototypes, three are now being seriously considered by publishers! More about this in the coming weeks. I met loads of new people and generally had a blast. Specials thanks to Rio Grande for providing food for everyone in the Board Room!

Looks like some printer troubles may push the Revolution! expansion's release date past GenCon. But it might still get done in time. At the very least it will be demoed there. The one space I had reservations about got a significant upgrade! The expansion is now officially awesome!

The game really being talked about this year was Founding Fathers, by Jolly Rogers Games. I didn't get a chance to play it, but I'm hoping one of the Yottaquest guys bought a copy. Anyway, I could not have been more pleased with how it turned out. Now to work on more game designs . . .
Posted by Philip at 1:31 PM