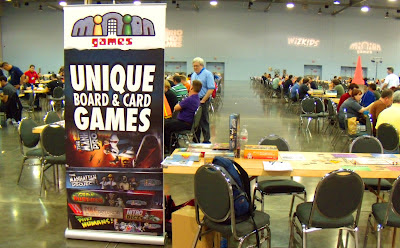 I've been so busy with post-Origins stuff that I almost forgot to blog about it. Wow, Origins 2012. What an amazing experience! I set out early Thursday morning with a backpack of prototypes and more games in my suitcase. And enough underwear and socks to make it till Saturday. This year I was flying solo--I've had a copilot nearly every other year. I planned to share a room with John Moller (of CarTrunk and UnPub fame), Darrell Louder (of Compounded fame) and Ian Rosenthaler (of Legend of the Lost Dutchman art fame). This worked out very well.

Thursday I made the rounds, scheduled some meetings and played some Lucky Dice (score=20). John already had the UnPub area going with Brian Lewis and his Titans of Industry. I didn't get to play, but I watched for a good while. Minion Games was a sponsor of the show and had lots of great posters everywhere. James Mathe did lots of demos in the Board Room (mostly Kingdom of Solomon and Manhattan Project--currently ranked 424!). As you might have heard, the crowd was a bit sparse that day. Here's Corey Young's now infamous picture of that sparseness (posted to BGGN). Traffic would increase over the next couple of days.


I had dinner with the Dice Hate Me / Clever Mojo crew that night at the Mongolian Barbeque, a first for me. For those not in the know, you start with a bowl and fill it with raw meat and veggies. Then you select a sauce. Then you wait in line, kind of like at an amusement park--"You stand behind the guy in the black shirt with the goatee"--while they cook it up on a big griddle with long metal sticks. Pretty tasty. It's all-you-can-eat for an extra $2, but my stomach was crazy and I had an appointment to catch.

Later that night, I got a chance to play the much-anticipated Princes of the Dragon Throne by Fred MacKenzie of Clever Mojo. Chris from Dice Hate Me snapped a picture. I'd like to say I enjoyed the game. I can at least say I didn't hate it. First off, this was one of the first six-player games ever, so the downtime was a bit more than expected. The deck-building aspect of the game is really pretty cool--I would like to see a little more of it. This might be a case of PotDT being a decent game that just didn't happen to appeal to me as much as to others (everyone else seemed to be digging it). I guess it's a "me, not you" thing. :) Don't knock it 'til you've tried it!

After that I watched a few other cool games going on. See John's recap for a detailed list. I turned in pretty late, but far earlier than many of the others. Day One had been good. Little did I perceive the amazing day that was to follow . . .