Thursday had been a good beginning. Friday morning, I awoke refreshed and ready for the day. First up, a roll of the Lucky Dice (score=80, putting me on the leader board for nearly half the day) at the Dice Hate Me booth (see his pictures here). I spent the morning running a demo of my soon-to-be-Kickstarted Family Vacation from Jolly Roger Games. Jacob Walker, the artist, was at the booth and had brought a shiny new version of the board. I took this to the Board Room and quickly found five willing players. The game went extremely well--everyone had a great time! 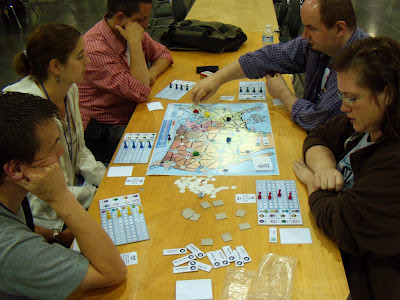 After lunch, I ran another demo of Family Vacation with an actual family (boy, girl and mom). They really got into the spirit of the thing--the boy made some very humorous comments about his "mom" during the game.


Just a little while later, I saw Wil Wheaton and company walking down our aisle. I introduced myself (it turns out Wil is a Revolution! fan) and even got to show him Family Vacation and tell him about some other projects in the works. He was either being very interested or very polite. Either way, it was a cool experience!

After this it was time to meet with Dan Yarrington of Game Salute. In case you've missed it, Dan's been quietly putting together a little game industry revolution. If you are an artist, graphic designer, publisher, game designer, playtester or just a guy that works in the warehouse, you need to talk to this man. He's building something amazing. Anyway, we spent about two hours talking about my various prototypes and brainstorming ways to improve their presentation. Dan is a master at game development. He seemed to have a definite plan about each one of my games.

At the close of the exhibit hall, I accompanied the Game Salute crowd (15+ people) to the famed Schmidt's Sausage Haus for what would be the longest dinner of my life. First off, we went the wrong way. When we finally arrived, we discovered that the wait would be an hour. No problem--I got to catch up on some phone calls. Then we just kept waiting. Two hours later, we were led to (crammed behind) some large tables in the back. The sausage buffet featured a lot of, well, sausage. My stomach had yet to recover, but I bravely forged ahead anyway. It was pretty good. Not two-hour-wait good, but not bad.

Dinner itself lasted another two hours. We did get a chance to have some nice game-industry-related conversation, so it wasn't too bad. I had expected to be back to the Board Room / Unpub area for more gaming with various people I'd met, but we didn't make it back to the hotel for games until after 11:00. I refer to this entire episode as the time I got kidnapped by Game Salute. We played two of my most-promising prototypes and both made a good impression. My head hit the pillow just after 3:00. The next morning Dan presented my with a digital contract. It was probably the best contract I'd ever seen. I read over it and signed.

Things are progressing quickly. I'm in the process of getting an official studio name/logo together and busy uploading updated versions of my games. We might even have some prototypes to show around at GenCon!

Games acquired: Hawaii (impulse buy) and Surf's Up (free from the Board Room).

Looking back, I completed every objective I had set for the con. Despite the less-than-stellar attendance, Origins 2012 was a great con!
Posted by Philip at 9:00 AM