Now on to my final day at GenCon. It was really great being able to spent three whole days there.

Saturday
This day began just a touch later, as I was still recovering from the late night before. Even so, I made it to the hall with enough time to grab a danish before my morning demo time with Game Salute. While waiting in the long line, I got to chatting with the guy behind me. He said he was from Ann Arbor, so like an idiot I said, "Oh, do you know Jason Kotarski?" because everyone from Michigan knows everyone else from there, right? He answered, "Jason who? Should I know him?" At this point I was feeling really dumb. I briefly explained our game Fidelitas and showed him my copy. He brought up the Kickstarter page and said, "I am now a backer!" Cool little moment.

As on Friday, I demoed Miracle Pill and Battle of Wits. Matthew was not with me. I thought maybe he was just sleeping in (he was up with us till 3:30 as well), but it turned out he was scheduled for a later time. After my first group came and went, no one else showed up (even though the event was sold out). I played in the game next door about managing boxing matches.

After this, I headed over for another demo of Spirits of the Rice Paddy. I did manage to find the right table this time, and we played a great 4-player game. One guy said it was the highlight of his con! After this, I headed into the exhibit hall one last time to make at least one purchase. On the advice of T.C. Petty, III, (and because a lot of the newer games were all gone) I decided to buy City of Iron by Ryan Laukat. I've been wanting to try one of his games for a while now, and this one seemed like a good place to start. I have since played a few times, and we really like the game! 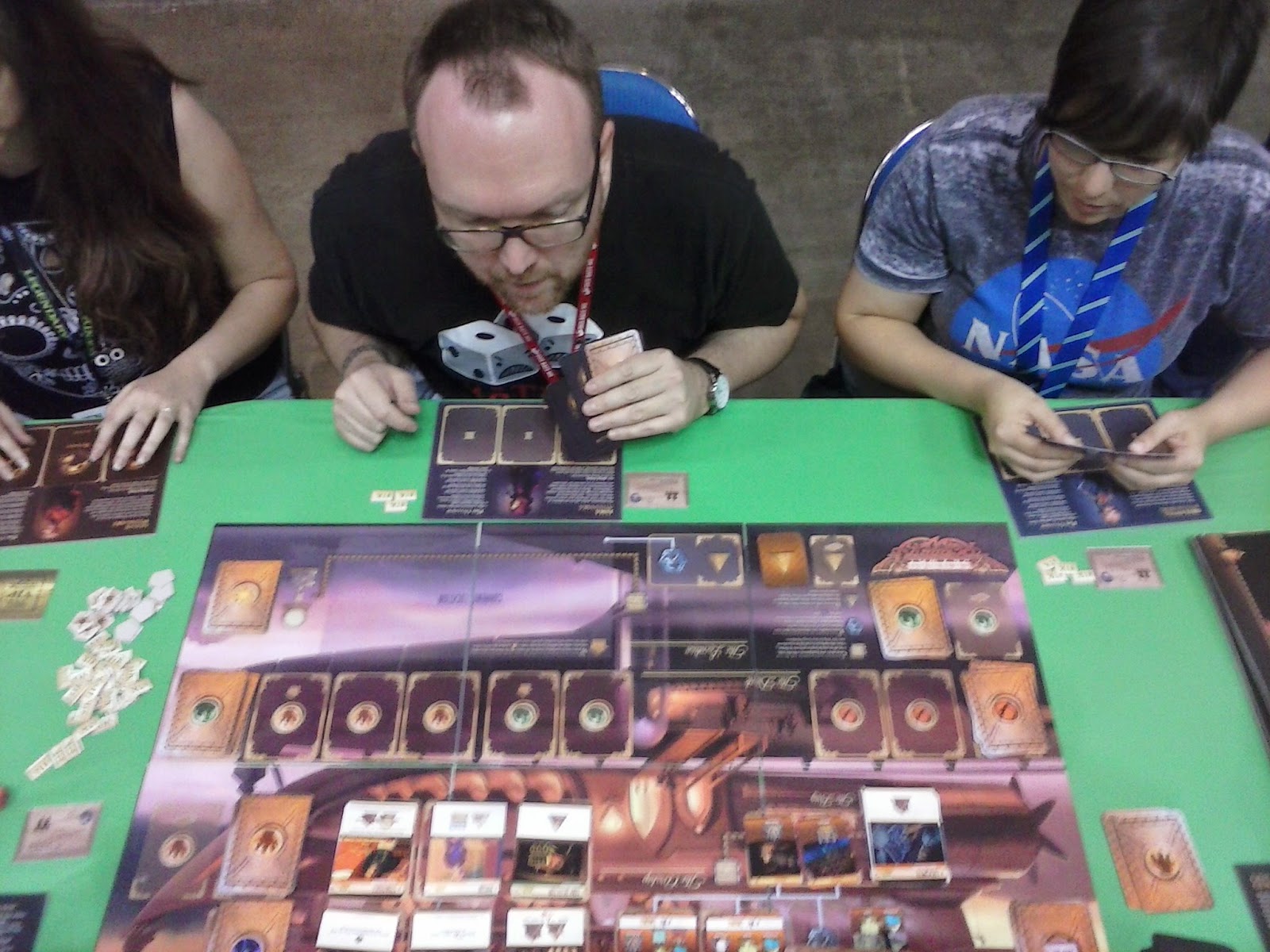 My final game of the day was a demo of Skyway Robbery with Chris Kirkman, Stephanie Straw, Dan Patriss, Tiffany Bahnsen, and Dan Halstad. All these folks are podcasters. The game seemed to go well, but we only had time to play a few rounds as there were a lot of distractions and I had to leave by 5:30. Even so, the reactions seemed positive.

My wife brought the kids up to visit the Indianapolis Children's Museum that morning and swung by to pick me up that evening. This was complicated by the Colts game beginning close to that time. It is always funny to watch the facial expressions as the colts fans interact with the GenCon people! We grabbed some dinner and headed home. So ended my GenCon 2014!
Posted by Philip at 10:05 AM