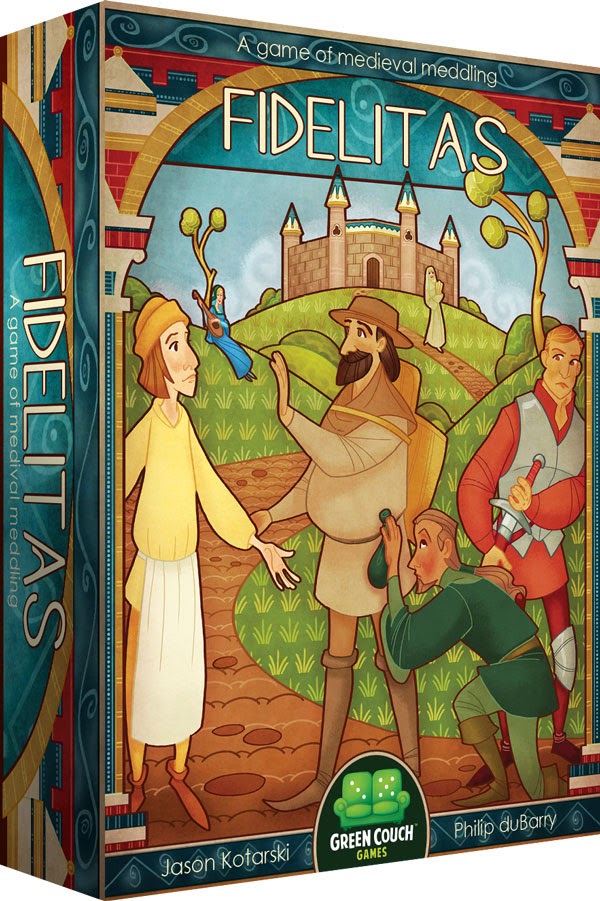 As you can see to the right, the Fidelitas Kickstarter is now live. Co-designer and publisher Jason Kotarski pushed the button at 8:00 this morning. I was still asleep.

As I write this (about twelve hours later) the project has already reached about 40% of the $12K funding goal! I've always wanted to be a part of a hot Kickstarter project, and now I am!

Thanks to all of you who have already backed our project--the early support is huge for these things! We have some great stretch goals planned, so stay tuned for more once we get closer to our goal.

"In Fidelitas, players take on the role of faithful citizens in a medieval city who are exerting influence in order to gain the credibility needed to lead the charge against the corrupt crown.

Players play character cards to various locations that make up the city in order to meet conditions of hidden objectives. Each type of character card is associated with a unique action that manipulates cards in the game: the Butcher bullies other characters to new locations, the Student gains more cards, the Soldier keeps the peasants from loitering too long, etc. In this game where keen maneuvering is key, attentiveness to the opposition may uncover hidden motives that seek to foil your bid for power.

The first player to gain a certain number points (depending on the number of players) is determined worthy to lead the revolt and also wins the game."

The project page has about 350 (something like that) links to reviews and walkthroughs. Jason sent out quite a few preview copies, and the initial impressions have been overwhelmingly positive. As with Courtier, I'm enjoying all the various pronunciations of "Fidelitas." fi-dil-EE-tas is just golden.

Anyway, it's been a cool day, and I look forward to seeing how the rest of the project plays out. I hope you'll consider joining the party before too long--thanks!